Do you love sport and would like a holiday that keeps you in form?

At the Hotel Belsoggiorno you can do it!!!

As well as having a selection of bicycles to use free of charge, our hotel is about 5 mins from the principal Nordic walking paths, Nordic walking trains all the muscles in our body without working the joints, as well as helping you to get into shape it also lets you enjoy the great outdoors, if you like the outdoors and you can go into the valley of the Conca , from sea level you can go up to the hills to Gradara and Mount San Bartolo, you have come to the right place !!!!

A little of our magical hinterland 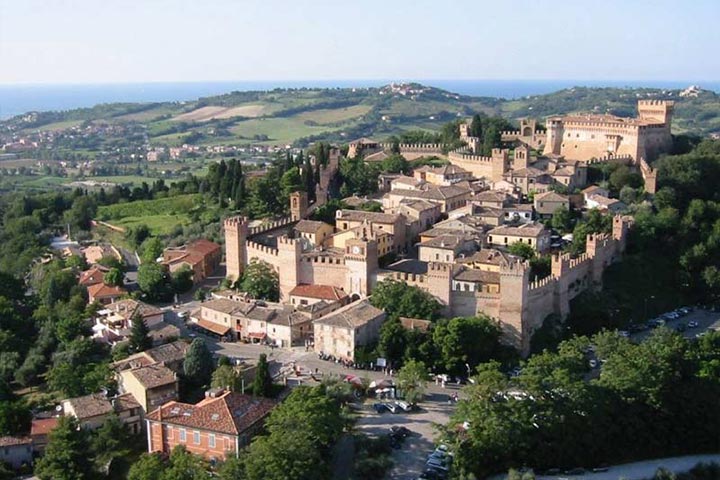 Gradara and its romantic castle. At 142 meters above sea level with the backdrop of Titano (Republic of San Marino) and Carpegna, about 3 km from the sea emerges Gradara, theatre of a tragic love story between Paolo and Francesca, sung by Dante, Petrarca, Boccaccio and D’Annunzio. The first construction corresponds to the medieval tower back in 1150. Followed by the Malatesta who transformed the tower into a fortress, closing it in two masonry walls. 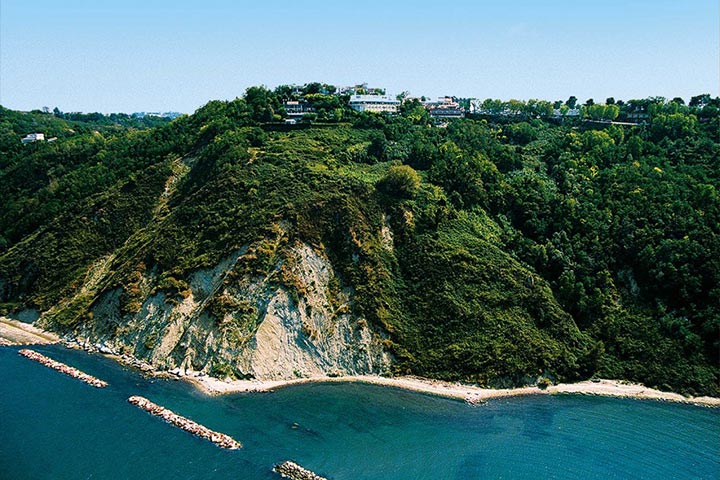 Gabicce and the national park of Mount San Bartolo. Leaving from Gabbice Mare following the Panoramica road, you climb up to Gabbice Monte in piazza Valbruna, the doorway to the national park and the heart of this little hamlet that has fantastic views over the Riviera. The regional park of San Bartolo institute since 1994, represents the first place with cliffs from Trieste and allows you to see the coast and the sea where the cliffs and the beautiful blooming ginnestre with is colours almost plays games, behind it the crystal clear water of the sea. From the green of the hills to the blue of the sea, the cliffs fall in to sea for a stretch of 10 kilometers. 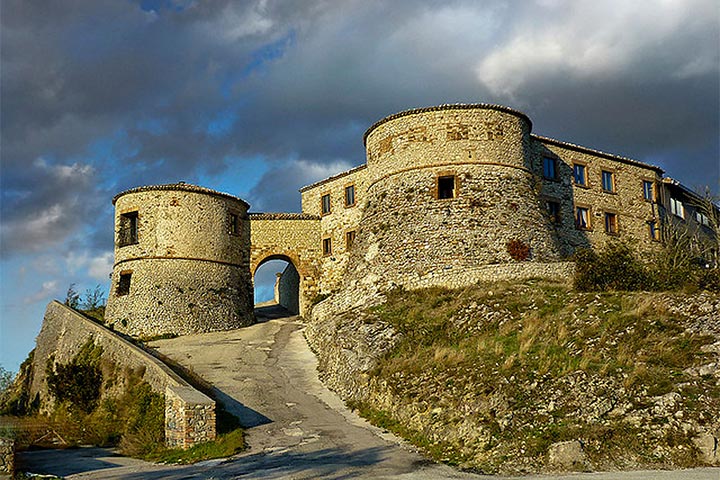 Torriana / Montebello. At 40 kms two fantastic strongholds that have seen the splendor of the Malatesta and bitter battles. Much history but also mystery and suspense with the legend of the ghost of Azzurrina, the child who went missing in the castle of Montebello.
To visit: The fortress and tower of Torriana, the water tree of Tonino Guerro, the fortress of Montebello, the sanctuary of the Madonna di Saiano, The Honey fair ( beginning of September). 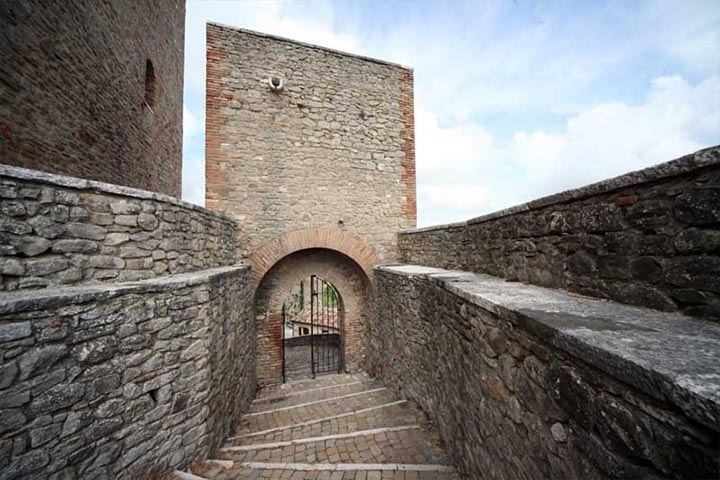 Montefiore. 17 kms, you breathe a different kind of air, maybe it’s the imposing fortress, with its severe lines, maybe the woods that surround the village centre, with its quaint shops, serves to create a special atmosphere where nature and history have found a happy union.
To see: the Malatestaiana fortress, San Paolo church, the Curina door, the Ospedale church and the sanctury of Madonna di Bonora. 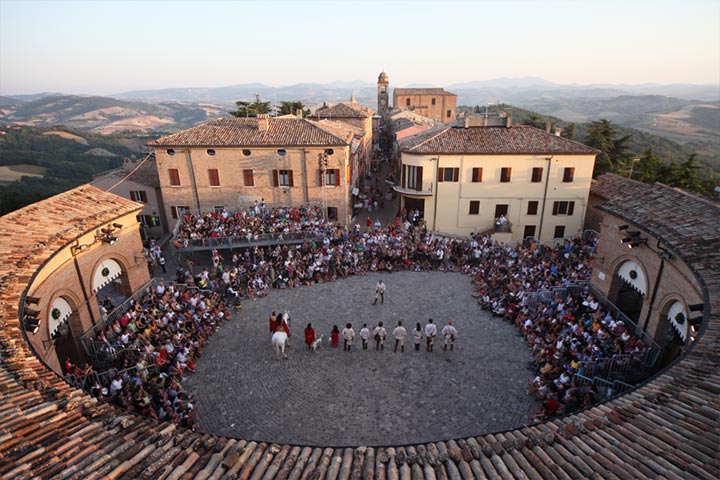 Mondaino. 15 kms, on the hillside, where once upon at time they grazed deer’s stood a temple dedicated to Diana that gave birthplace to this village. Over the centuries, the present center received its present appearance with the unique circular piazza, palaces and churches. Mondaino is worth a visit.
To see: The Piazza Maggiore, the Malatestina Fortress, the convent of Clarisse, S.Michele’s church, the ex convent Francescano, the museum Paleontalogical, the Deer festival (Agosto) and the Latinus Ludo (Maggio). 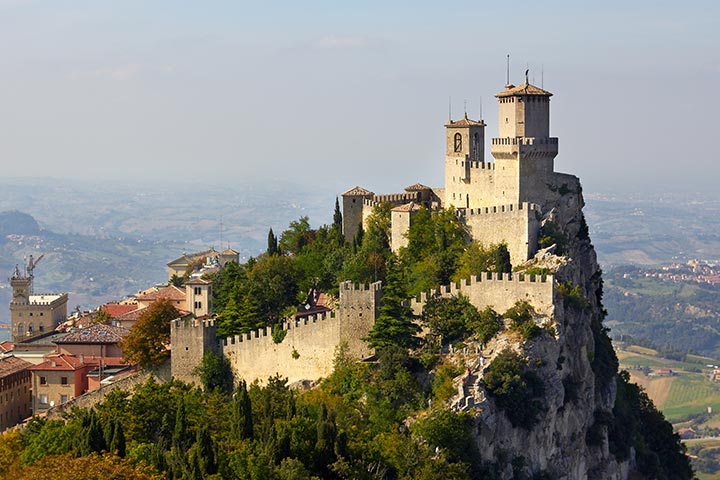 San Marino is a town of medieval of impact, nestled in a panoramic point on the slopes of Mount Titano and it is the oldest republic in the world. Despite the ravages of war there are the remains of the three walls dating from different periods. These walls that have surrounded it in its expansion were surmounted by as many towers and pens, called Guaita or rock (XI century), Montale (XII century), and Cesta (XV century).
Among the important buildings are, the church of San Francesco (1361 with subsequent remakes), at the door of the same name is the neoclassical basilica of San Marino (1836, built on the site of the parish church), the Valloni palace (XV century), home of the government museum.

Cattolica’s aquarium. The aquarium is a few meters from our hotel, there you can see rare marine species, big sharks and hammerhead sharks, The buildings which house the aquarium date back to 1932 and was built as a marine colony, and today represent one of the most beautiful futurist reality of the entire Adriatic coast, the structure is like a fleet of boats ready to be launched!

Oltremare. The Oltremare Park and IMAX cinema, 7 kms , inaugurated in June 2005 is an incredible journey in the wonders of the planet earth and our seas. The extinction of dinosaurs, seahorses, birds of prey, lots of nice friends down on the farm, and the fantastic dolphin display!

Aquafan. The water park Acquafan, 7kms, is the most famous water park in Europe, 90 thousand square meters on the green hills of Riccione, over 3km of slides. A massive wave pool. The animation team, shows, special guests and big events…….

Indiana Golf. The Indiana golf park, 7kms, is the biggest crazy golf themed adventure in Italy, built in a park of 7000mq, ideal for young and old, it’s divided into two different games. The last crusade and The lost ark, fantastic journey over bridges, around lakes and waterfalls all to the sounds of the forest………

Fiabilandia. For the younger ones. At only 16kms,there is the beautiful Fiabilandia park, with lots of attractions, shows where you can stroll through the park …… see if you can find Captain Nemo, Peter Pan, the magic town, the old troll and many more famous cartoon characters!

Italia in miniatura. At Italia in minatura, 25kms, you can find over 270 perfectly reproduced architectural wonders to travel in a few hours all over Italy and parts of Europe and the most romantic Venice reproduced in one fifth of the size, so you can also travel along the Grand Canal…….!!

Mirabilandia. At Mirabilandia live the fun, Its is at Ravenna, which takes about 40 mins by car, It’s the largest theme park on the Adriatic coast, there you will find lots of rides shows and attractions for adults, kids, and the young ones, fun for everyone!!!

Ask for a quote Call us

Watch the sea in live